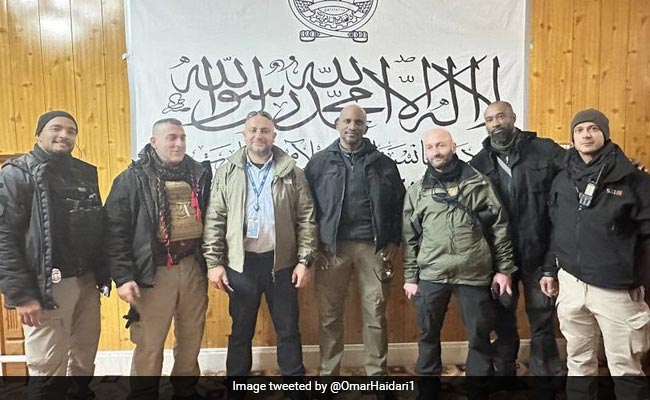 Photos of some UN security personnel in front of the Taliban flag drew criticism.

The UN has apologised for “a significant lapse in judgement” after photographs surfaced of some of its personnel in front of a Taliban flag in Afghanistan during a visit by deputy Secretary-General Amina Mohammed this week to the war-torn country when she met the de facto authorities and expressed alarm over women’s rights violations.

Ms Mohammed, the highest-ranking woman in the United Nations, along with Executive Director of UN Women Sima Bahous and Assistant Secretary-General of the Department of Political, Peacebuilding Affairs and Peace Operations Khaled Khiari completed a four-day visit to Afghanistan on Friday.

During the visit, the delegation met Taliban leaders in Kabul and Kandahar and conveyed their alarm over the recent restrictions on education and work of women and girls across the country.

However, as Ms Mohammed was meeting the group’s leaders, photographs of some UN security personnel in front of the Taliban flag drew criticism.

“That photo should never have been taken. It clearly shows a significant lapse in judgment. It was a mistake and we apologise for it. And in terms of that, I believe the supervisor for these officers has spoken to them on this,” Farhan Haq, Deputy Spokesperson for Secretary-General Antonio Guterres, told reporters here Friday when questioned about the visit and the photographs.

Haq said the photograph was taken while the Deputy Secretary-General was meeting the de facto leaders in Afghanistan. Her security had taken her to that meeting and were waiting next door, he said.

In a post on Twitter, Head of Foreign Relations for the National Resistance Front of Afghanistan Ali Maisam Nazary said the “@UN personnel in Kabul taking a photo w/a terrorist group’s flag brings the United Nation’s impartiality & integrity into question.”

“We kindly ask @antonioguterres to investigate this matter & for @UNAMAnews to prevent such insensitive actions that can tarnish its reputation,” Nazary said in a reference to the United Nations Assistance Mission in Afghanistan (UNAMA).

Leading the high-level UN delegation on behalf of the Secretary-General, Ms Mohammed conveyed concerns over the Taliban’s recent decree banning women from working for national and international non-governmental organisations, a move the UN said undermines the work of numerous organisations helping millions of vulnerable Afghans.

“My message was very clear: while we recognise the important exemptions made, these restrictions present Afghan women and girls with a future that confines them in their own homes, violating their rights and depriving the communities of their services,” Ms Mohammed said.

“Our collective ambition is for a prosperous Afghanistan that is at peace with itself and its neighbours, and on a path to sustainable development. But right now, Afghanistan is isolating itself, in the midst of a terrible humanitarian crisis and one of the most vulnerable nations on earth to climate change,” she said.

“We must do everything we can to bridge this gap.”

The Taliban have issued an order to close universities to female students across the country until further notice, barred girls from attending secondary school, restricted women and girls’ freedom of movement, excluded women from most areas of the workforce and banned women from using parks, gyms and public bath houses.

“What is happening in Afghanistan is a grave women’s rights crisis and a wake-up call for the international community. It shows how quickly decades of progress on women’s rights can be reversed in a matter of days,” Ms Bahous said, expressing UN Women’s solidarity with Afghan women and girls and vowing to continue amplifying their voices to regain all their rights.

“We have witnessed extraordinary resilience. Afghan women left us no doubt of their courage and refusal to be erased from public life. They will continue to advocate and fight for their rights, and we are duty bound to support them in doing so,” Ms Bahous said.

In a press release issued here, the UN said it and its partners, including national and international non-governmental organisations, are helping more than 25 million Afghans who depend on humanitarian aid to survive, and remain committed to staying and delivering.

The UN said that the most recent decrees issued by the Taliban banning women from working for NGOs has forced many partners to pause operations that can no longer be safely and meaningfully delivered.

While the recent exemptions to the ban introduced by the de facto authorities are opening spaces for humanitarians to continue – and in some cases resume – operations, these remain limited to few sectors and activities, the UN said.

“The effective delivery of humanitarian assistance is predicated on principles that require full, safe and unhindered access for all aid workers, including women,” Ms Mohammed said.

The visit by the top UN leaders to Afghanistan followed a series of high-level consultations on Afghanistan across the Gulf and Asia. The delegation met with the leadership of the Organisation of Islamic Cooperation (OIC), the Islamic Development Bank, groups of Afghan women in Ankara and Islamabad and a group of Ambassadors and Special Envoys to Afghanistan based in Doha.

The delegation convened with government leaders from the region and religious leaders to advocate for the crucial role and full participation of women and rally support for the Afghan people, the release said.

It added that throughout the visits, countries and partners recognised the critical role of the UN in building bridges to finding lasting solutions, as well as the urgency to deliver lifesaving support and maintain effective engagement, led by the United Nations Assistance Mission in Afghanistan.

They asked that efforts be intensified to reflect the urgency of the situation and stressed the importance of a unified response by the international community. The need for a revitalised and realistic political pathway was consistently highlighted and all remained firm on the fundamental principles, including women’s and girls’ rights to education, work and public life in Afghanistan.

There was broad consensus that the region and the Organisation of the Islamic Cooperation’s leadership on these issues was critical. The proposal of an international conference on women and girls in the Muslim World during the month of March 2023 was also considered and agreed in principle, the release said.